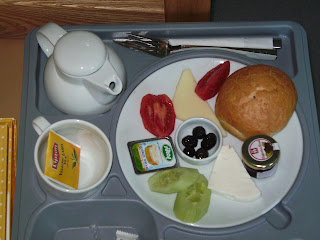 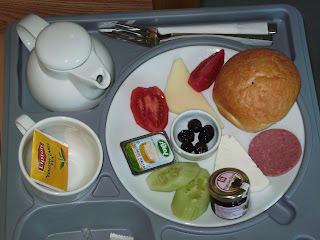 Recently, my sister-in-law Kathleen sent me an Internet game to try. It was called "Spot the Difference." I stared at 2 pictures of Florida condos for about 15 minutes and only found about 2 of the 7 differences between the pictures. I became increasingly impressed with Kathleen because she told me sometimes she will play the game and challenge herself to find all the differences before she 'makes dinner' or whatever task she needs to do. Not so for me. After staring at the computer those 15 minutes, I realized that I should be honest with myself, some days, I'd just rather not be intellectually challenged. I do realize that perhaps I'll be the most likely to lose my memory in old age, but at least I'll have Kathleen to bring me crossword puzzles to try to stimulate my brain.
Well, today I challenge you to stare at my 2 pictures and "Spot the Difference." This is an easy one. Did you find it? It's the salami. The morning after I gave birth to Benaiah, the meal on the top was brought to me. The meal on the bottom was brought to Ross. It is a typical Turkish meal...hot tea, tomatoes, cucumbers, feta and regular cheeses, olives, bread. (This has become one of my favorite breakfasts.) But I noticed that I didn't get the salami on mine. I mentioned it to Ross and he said, "Oh, Sara, it was just an oversight." Not so. The next morning, the exact same thing happened. I looked at Ross and said, "Oh. No meat. Mummy gets no meat again." (in my best Singaporean accent). He grinned, realizing he had the advantage and said, "I can cut you a little sliver maybe." Evidently there is some Turkish superstition I am unaware of. I'll have to ask around. It is meat products? No, they gave me beef for dinner. Is it dairy? No, there are the cheeses. Is it spicy? No, this salami wasn't spicy. Why does Mummy get no meat? I've only just birthed a nearly 9 lb baby and am producing food for him 8 times a day. But Mummy gets no meat.
Posted by Sara Campbell at 9:06 AM

Maybe it's a "cold cuts" thing - you know the whole lysteria fear. Oh wait - was this AFTER you delivered? I dunno then.

And there is another difference...the cheese and the jam switched places :). Do I get a prize?

You
are
insane!
Love, Brenda

The one who is feeding others needs more food!!!!!

Sara,
That was very entertaining. You're such a good writer. My kids enjoyed finding the difference. Aren't you glad thought that you didn't get date and black chicken soup during your confinement like in Singapore?? :)