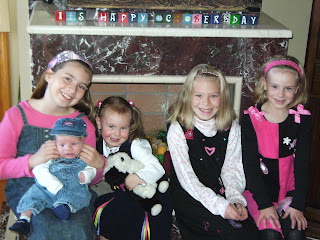 When I had my second daughter, I thought it was just so cute to dress my two girls alike. I did it. A lot. Then I had a third daughter and began to realize that if I continued to dress them alike, my poor little Esther (#3) would end up wearing the hand-me-downs of her sisters..basically consigning her to wearing the exact same clothes for 5 years as she grew into those 'matching outfits'.

So, I began to 'co-ordinate' them rather than match them. It's actually a fun challenge. I think that on some days, I am the only person who sees the connection they all share (butterfly theme...or denim cowgirl motif...or athletic shirts), but I still do it.

Now I have a boy. And we have a lot of pink. In the photo above, I co-ordinated all the girls in a theme. I started with Esther who had a hot pink and black dress. Then I moved to Annika who had the dark dress, but a white shirt with hot pink hearts. Eva moved the group from the hot pink into solid white, but held her own with the dark dress. Mary Erin ended up in a long denim jumper, but pulled the hot pink back into the mix. I know. I think too much. But who better to tie Mary Erin in than her baby brother with some denim overalls. But he will not be in pink, and as I said, we have a lot of pink, so the game may need to end at some point.
Posted by Sara Campbell at 8:16 PM

Too cute! I can see the difficulty of the challenge for sure. Good luck with that!

I laughed thinking about my days of "coordinating" my four - two girls and two boys. Once everyone ended up in denim with white shirts of four different styles. Genuis idea - I thought. Ha. Wait until your all-boy son wants to imitate his sisters in some way. They can't help it when older sisters are their playmates. The girls used to dress their little brothers up like, what else? Girls. I still remember the day I saw Matt clunking down the hall in a dress and high heels. I was mortified!! I drew the line at the makeup, though. :)

P. S. I still like to coordinate the kids for group pictures even though Kathleen is almost 22 - certainly no kid. She still loves the fun of it though, and Matt (the youngest) still can't understand why his teeth have to be so clean if he's not allowed "to even kiss a girl." :)

Oh I just love the outfits! And Benaiah's is so sweet. It was my favorite one when my boys wore it. It's so boyish!! When Mom bought Esther's jumper, I fell in love with it and was sad that there weren't more in my girls' sizes. So sweet!!

Hey Sara! I found your blog through Cassie. Your children are adorable. And the poor baby will be dressed up in princess clothes before you know it, so don't say he'll never wear pink!:) Whitney

Your family is so beautiful! Sara - you have the most precious children!!! (co-ordinated or not!)