Well, right on the heels of the soccer mom morning, we had planned our first-ever surprise birthday party for a CampbellClanKid. Firstborn was turning 15. I had secretly invited a bunch of her friends and gave them the evil-eye warning look as I told them it was a secret! The plan was for CC to 'forget' something at the soccer game, require Firstborn to go back to the field with him, then bring her back to a room full of friends and a surprise birthday party. It was a perfect plan. But after 2 games in the sun, she was tired and even feeling a little down, wishing she had done better in the second game, where she was put on the field rather than goalie. CC got the wonderful (ha!) idea when we pulled up to the house to tell her he wanted to take her out for a coffee and talk to her about her attitude. This plan, he thought, was brilliant...the only problem was that she was already tired and a little discouraged, and it just made her cry. She ran up to her room, as I called up, "Please get a shower. You'll feel better." (didn't want her to stink at her party!!!!) Then she got on her laptop and browsed facebook, pulling on her pajamas! This was not going as planned. Some twerp made a less-than-positive post to her facebook page. Guys sometimes think 'mean' equals 'flirting.' That made her cry more. Suddenly, we were in a panic. She was in pj's, crying, and Twinkle was downstairs, eyes-wide, telling us the friends were signing off of Facebook and heading to our party. Firstborn kept saying, "But I'm just tired, why in the world do I need to go out for coffee?" Clearly, no one had broken the promise not to tell her!

We quickly scrambled and went to Plan B. CC got her on the upstairs terrace, while I sent Miss Middler, ever the helper in times of panic, downstairs to keep them all from ringing the entry bell. I ushered them in, having them leave their shoes outside instead of inside. Once they all arrived, we hid in the den, proud of our quick change of plans. 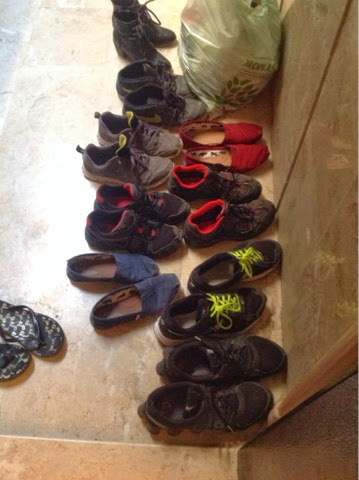 She walked in, then quickly turned away...shocked, happy, but wanting to hide her red face! CC burst into the room with, "It's tears of joy, everyone!" ha ha! She quickly washed up, then came in to many hugs and laughter. I think it was just what she needed....to be reminded that many, many people love her and that God has blessed her with many friends. 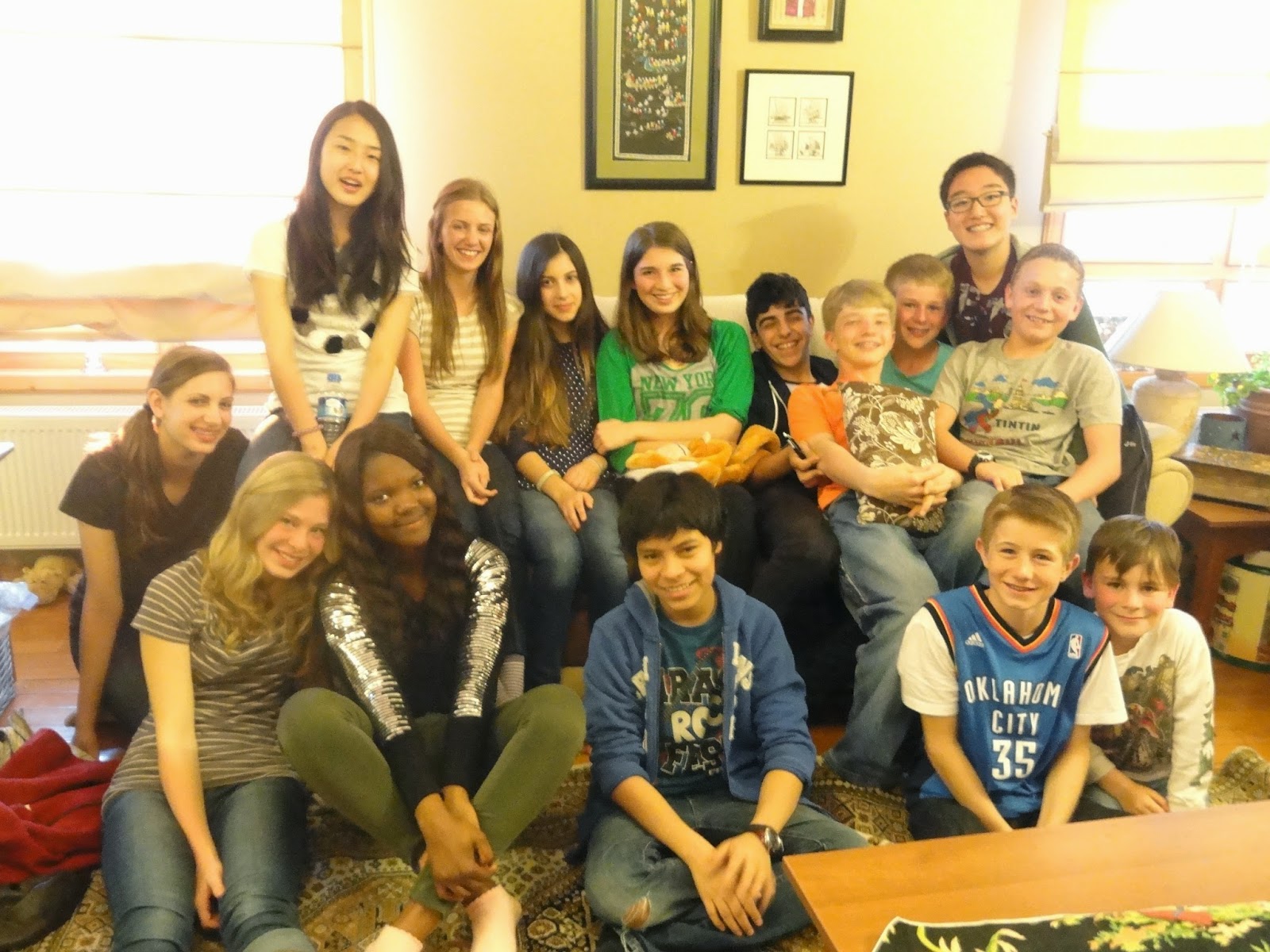 This gang  consumed more pizza than I thought humanly possible. Now I know to order 8 larges, not 6! 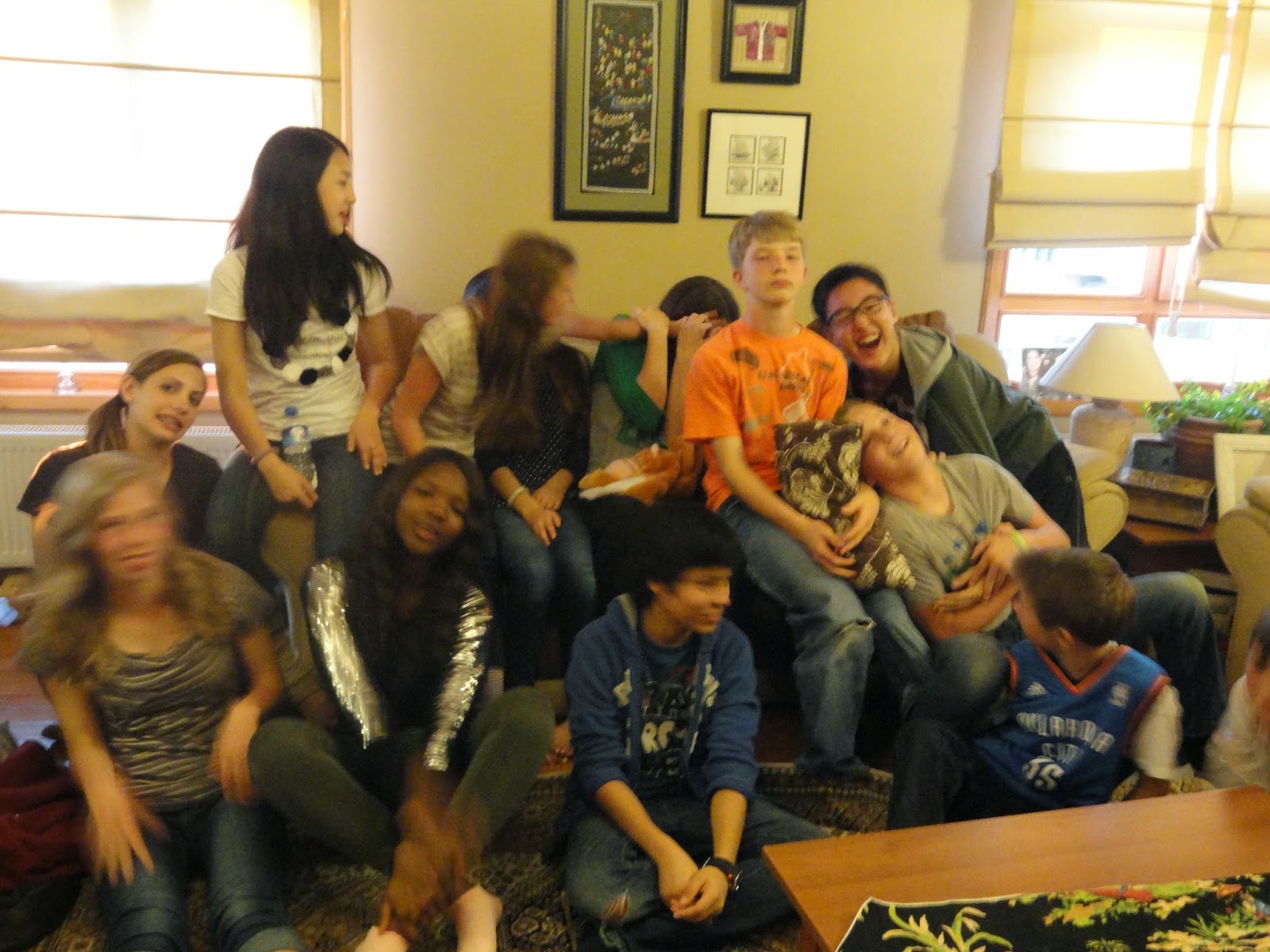 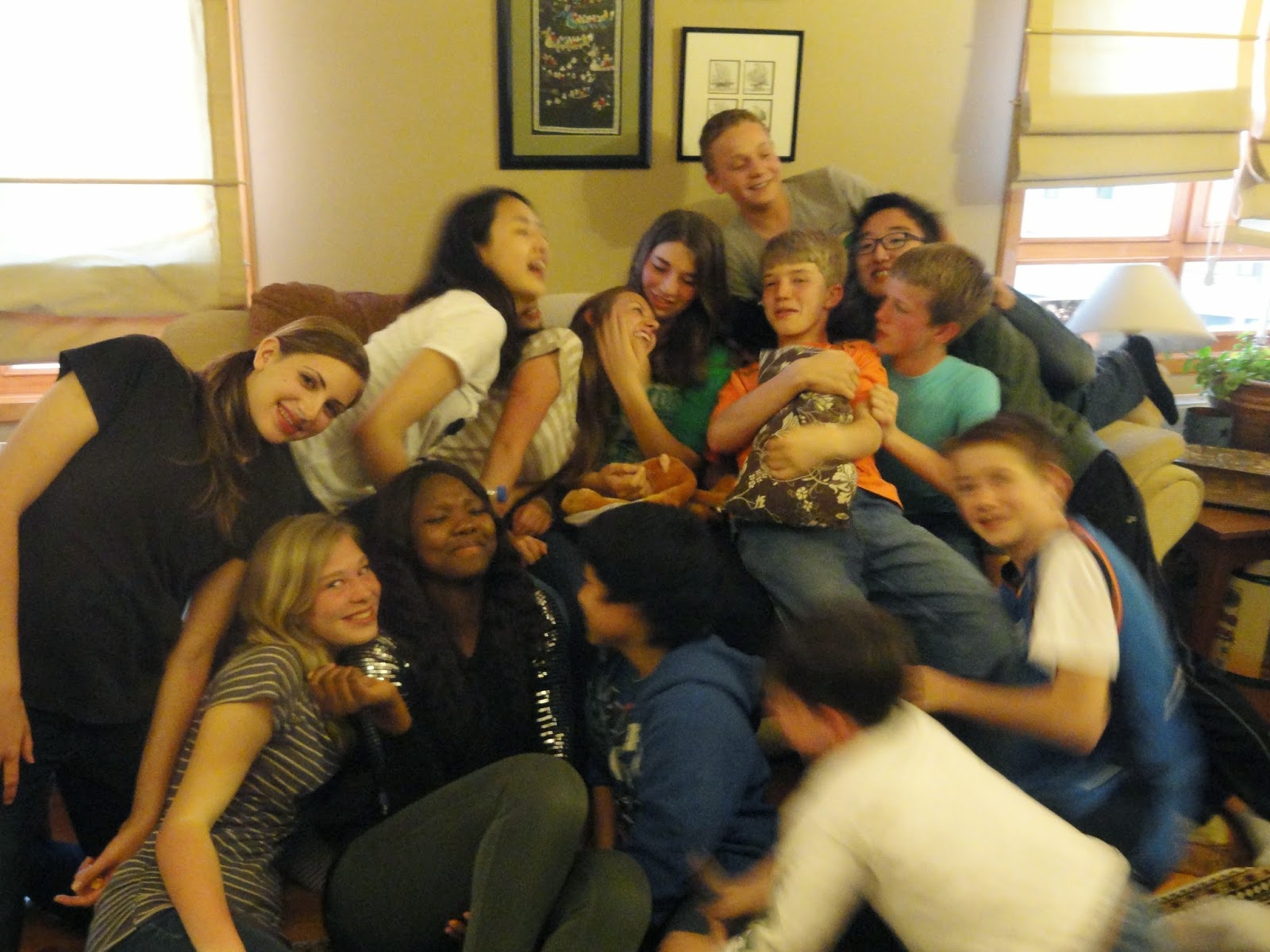 We served them cake and ice cream. 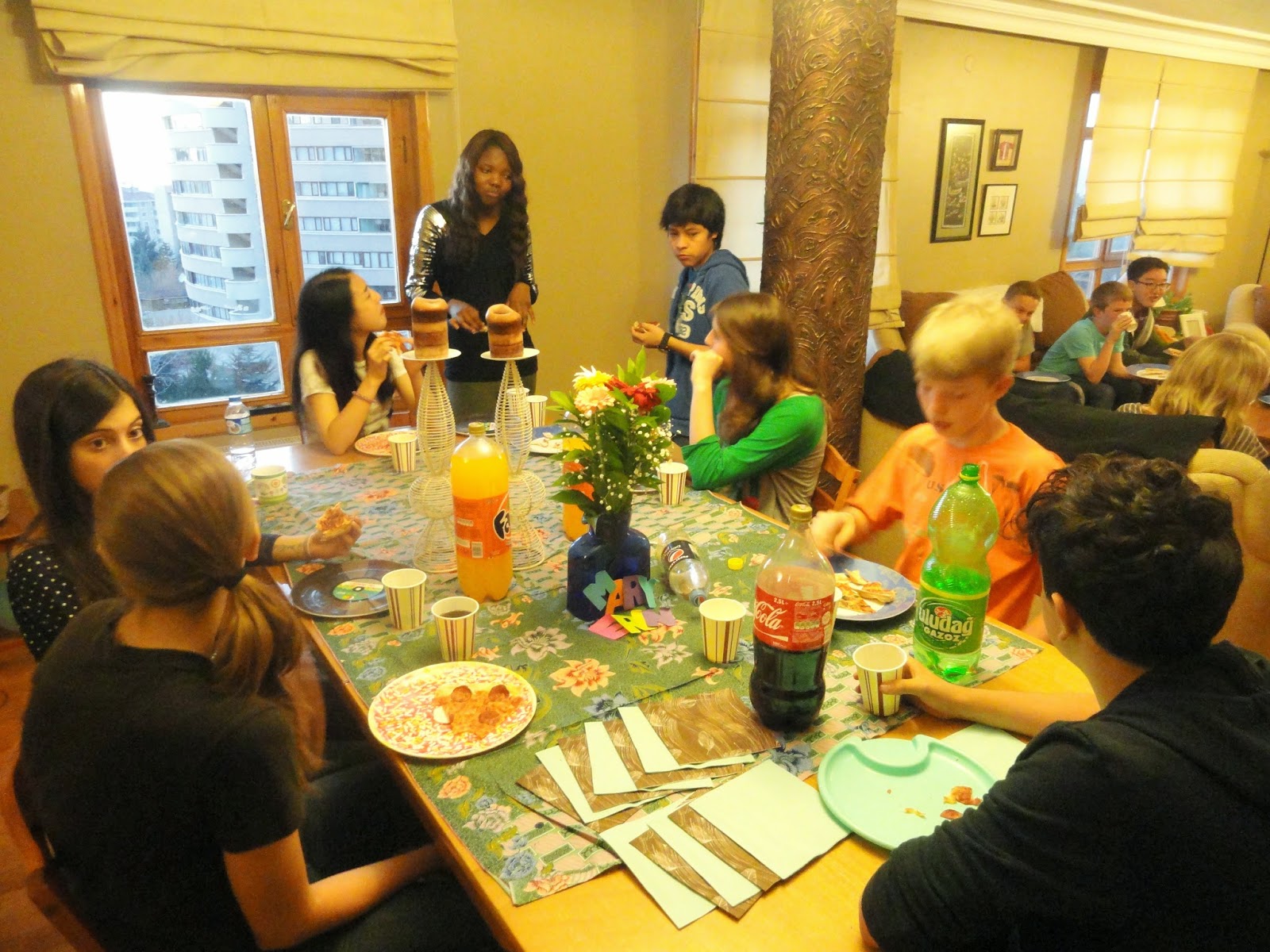 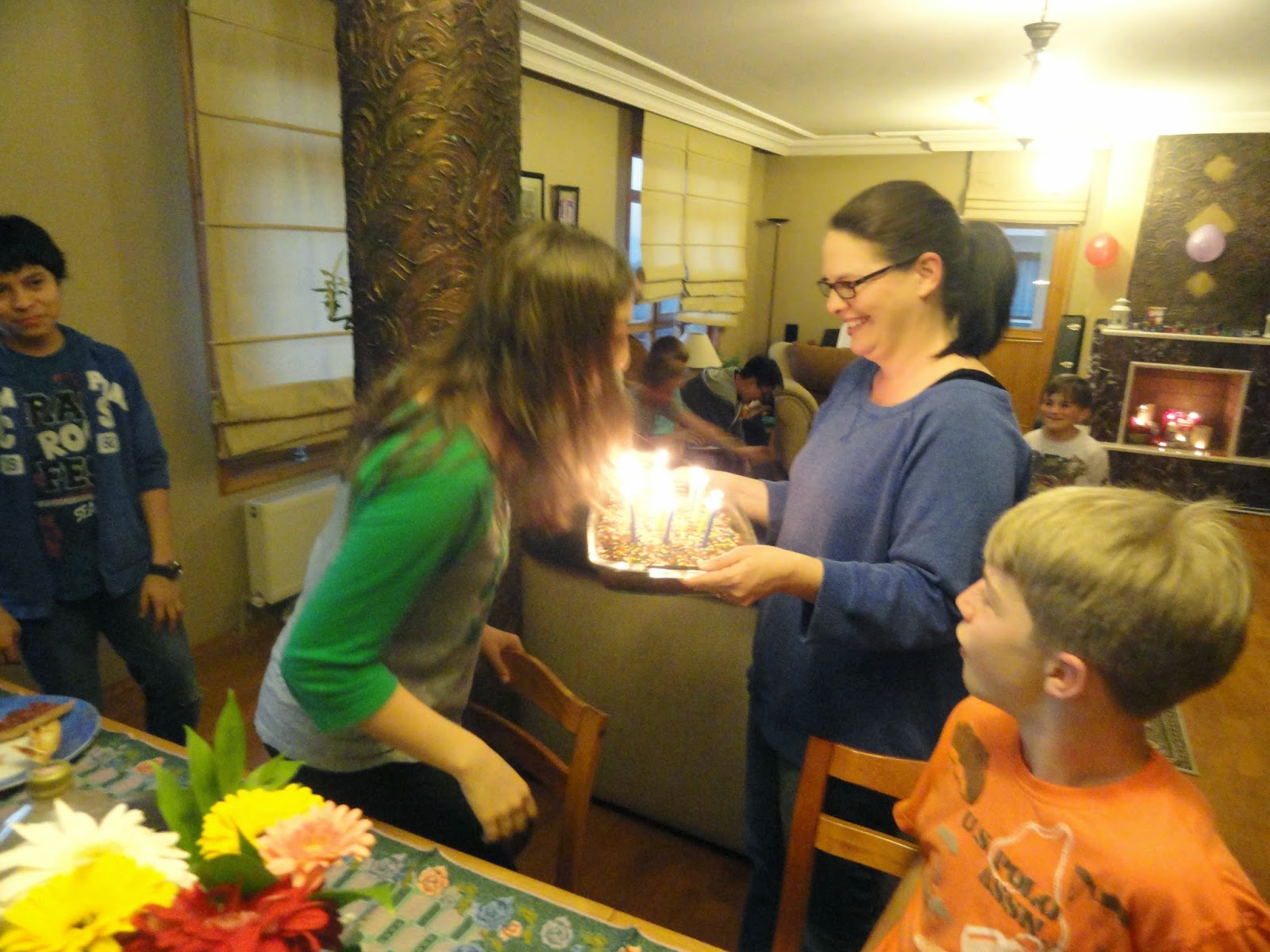 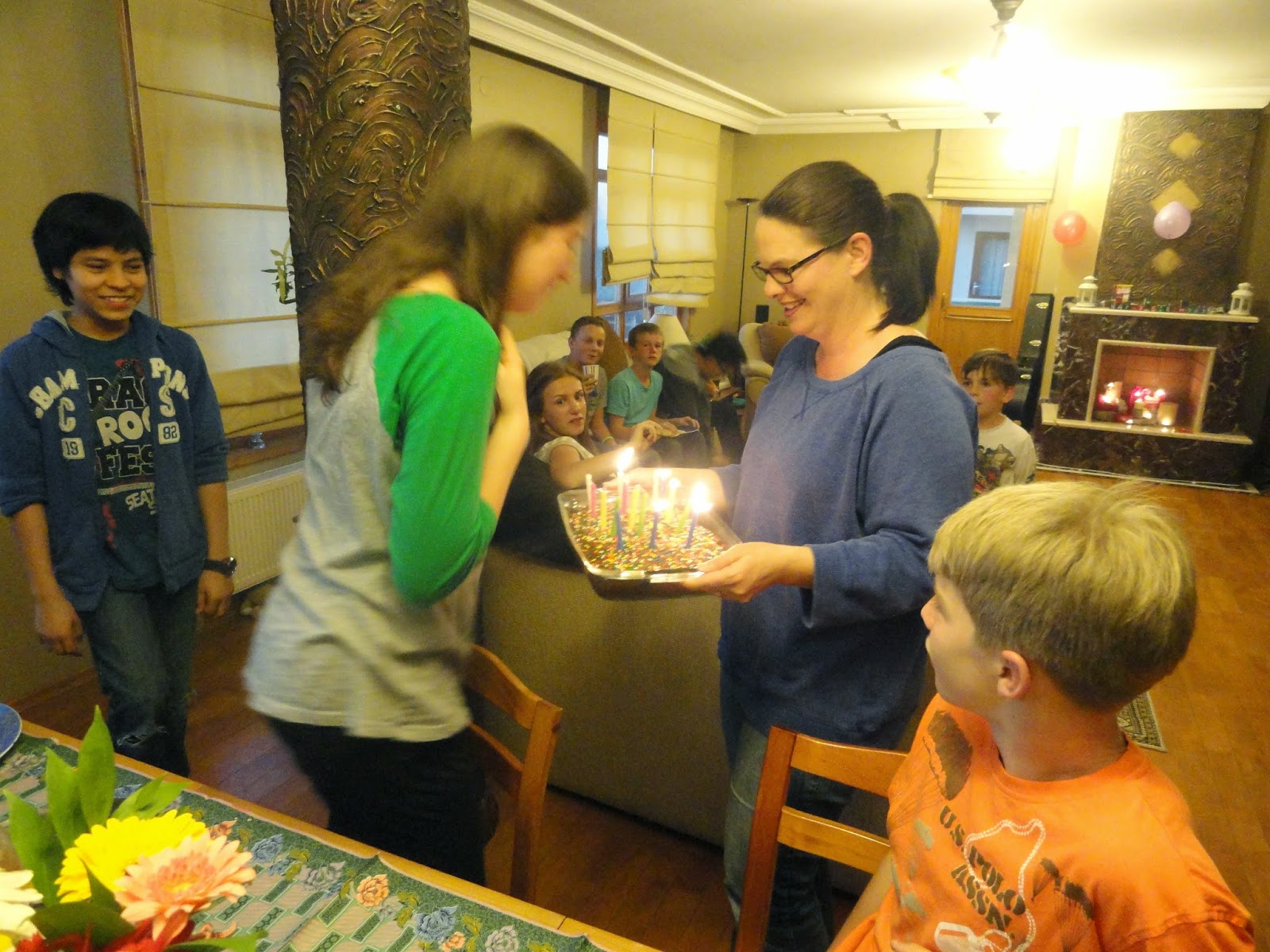 I should add here, that as the story unfolded and the humor of the situation was understood by all, her friends started whipping out their iphones, etc. and texting Mr. Twerp to let him know he'd hurt her feelings. The next day he showed up with a birthday gift for her! (Though I wanted to let the guy know exactly what I thought of what he said to her, I let it work itself out...a much better plan.) 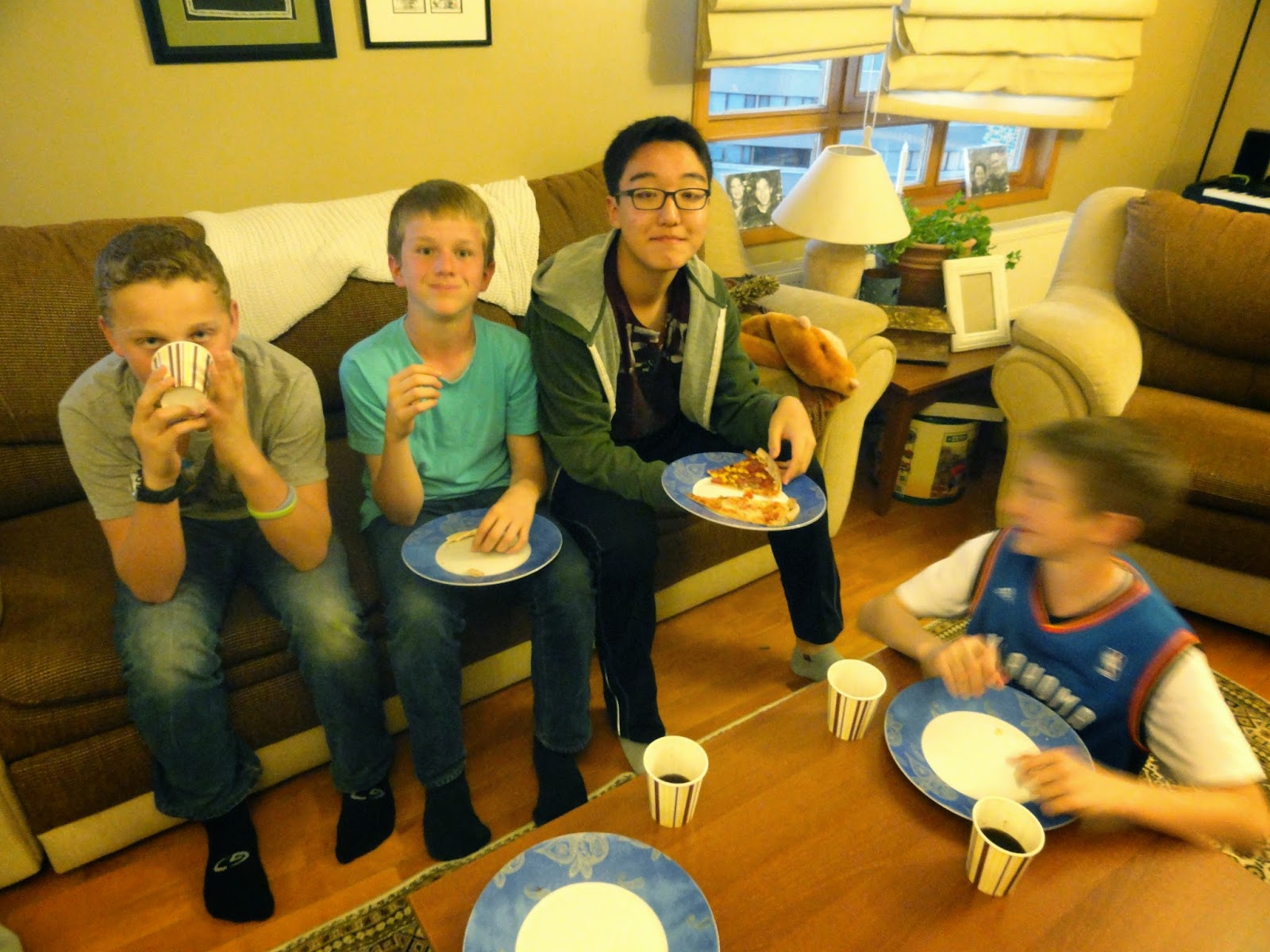 Then, they watched a Spiderman movie. When it was over, they made no move to leave. CC said, "Well, we can't just force them out." We. were. exhausted. I said, "They're preteens, yes we can." I assured them all we were thrilled to have them, but I just knew their parents would be expecting them soon! It was a great day. Sometimes I think the Plan B is more memorable, don't you?
Posted by Sara Campbell at 2:50 PM

How sweet!!! Happy birthday to your oldest! And wow- preteen stage - please host a lot and write about it!!

In fairness, it is not because they are bad. They are all sweet godly young people. It's the raging sea of hormones during these years that causes the upheaval.

And your age! I giggle when I say that. I made it fine through the first ones, but when I crossed 50, ooh boy!

Now, my baby is 18, a solid Christian young man we are very proud of but still loaded with hormones, busting to spread his wings and fly. Boys truly are different and if I am not mistaken, your youngest is a boy!?!?! :))

Seriously, I hope you don't mind a little good natured teasing . . . That's all this is. I think all your kids are sweet and beautiful. I hated Mary got her feelings so hurt but it seemed to turn out well, bless her heart.

God has certainly blessed us all with some fine young people, don't you think?