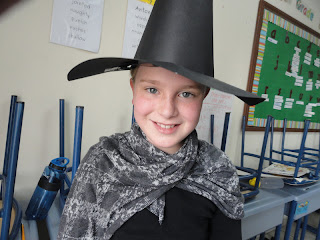 We've had two occasions to dress up recently. Miss Middler's class did a play, which was a twist on fairy tales. In this play, all of the accused had to appear in court. She was Auntie Pot Pie from Blame It On The Wolf.

And then in honor of Dr. Suess' birthday, the little ones got to dress in pajamas. The upper elementary requested a day to dress as a book character. These two divided up a pirate costume, added some more, and were pirates from Treasure Island. Mighty cute! (We are certain that the pirate had a crow rather than a parrot.) 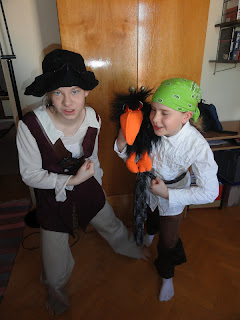 Posted by Sara Campbell at 1:09 PM

Too cute- dressing up is always fun!

Any reason to dress up for a school!