...the mice will play. We do try to have a little fun when Papa is gone, to make the time go a little faster. This was taken at my birthday dinner with friends...I think I look pretty good for 41, don't you? Strong, anyway. 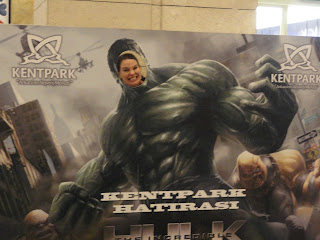 The second weekend CC was gone, I made pancakes, and we went to the mall for our annual bowling game. Unfortunately, the rates to bowl had gone up significantly. We opted to play a few arcade games instead. Bumper cars were a hit with everyone. 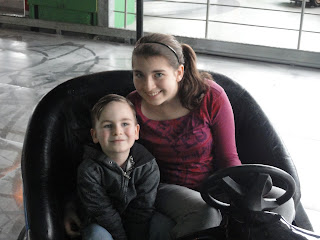 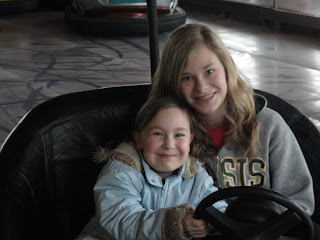 Big Ben wanted to drive a motorcycle. I am still amazed by having a boy. My little girl would never have wanted to get on one (still wouldn't!) Thankfully, this was one of those games in which you never really crash. If you fly off a mountain, you just land back on the bike and get points for how many times your man flips in the air. Big Ben chose a bare-chested, muscular African-American with a lot of chains and tatoos to represent him. 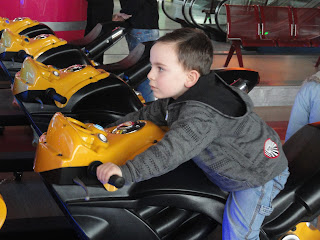 We also played a little air hockey. Twinkle Toes and Miss Middler were great competitors. I assumed Big Ben and Sweet Cheeks would just hit the ball back and forth and be thrilled with the idea of how smoothly the puck would glide. Not a chance. The minute Big Ben knocked it into the goal, he threw both #1 fingers in the air and screamed,
"Benaiah 1. Eva 0.Whoooohoooo!" 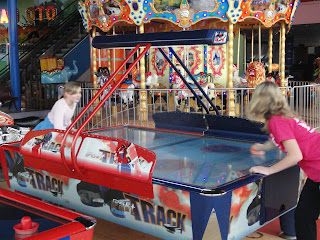 It was a nice diversion to kick the weekend off. But I'd take CC being home over arcade games anyday!
Posted by Sara Campbell at 3:07 PM

Separations stink. Period. But I'm glad you had some fun thrown in to pass the time! :) Do you have a summer schedule at all?